Behind the Scenes: Winter Weather Operations 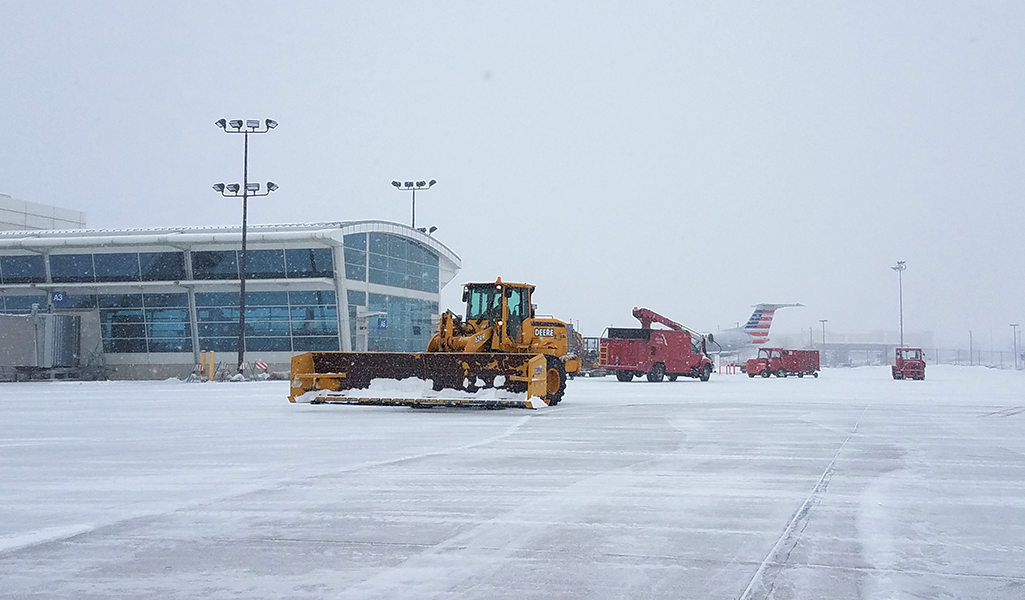 It’s no secret that unpredictable winter weather can disrupt travel plans. When your flight is delayed or even worse, canceled, we understand you probably have a lot of questions about what went wrong and what to do next.

In this article, we’re pulling back the curtain on winter operations at the Quad Cities International Airport. As you’ll see – both the airport and the airlines play an important role in keeping things moving.

Grab a shovel but don’t touch the salt.

At MLI we have a team of employees who are on call, day and night, to help clear our runways and taxiways during a winter weather event. That’s no easy job! They have to be able to operate a variety of big machines and know the layout of the entire airfield. Navigating around aircraft in winter weather while operating big equipment is challenging – and they do it in some of the worst weather conditions imaginable.

But did you know that salt is not allowed on the taxiways or runways? It’s highly corrosive and could be considered FOD – foreign object debris – which can be harmful to aircraft. There’s no pre-treating surfaces to get ahead of a storm. Instead, airports rely on specialized liquid and solid deicers, and a variety of different heavy machines to push, brush and blow snow off of surfaces.

Cleared for takeoff…or maybe not?

While the airport snow removal crew works, the airport operations coordinator tests the surface conditions of the taxiways and runways. The coordinator uses a special mechanism in their vehicle to gauge how easy it is to stop which is then relayed to pilots. The pilots take that information and ultimately decide if the conditions allow for a safe takeoff or landing.

While it may be frustrating when a flight is delayed or canceled, know that your flight crew must consider what is safest for everyone on board. The weather on your journey and conditions at your next airport must also be clear. That’s why a big storm moving over an entire region can cause widespread backups. Delays or cancellations by the airlines can oftentimes be created by disruptions in their system somewhere else in the region, so even if MLI stays clear, poor conditions elsewhere can prevent an aircraft from getting to future connections.

Planes must have clear surfaces to operate safely, and that’s where the deicing process comes in. Most travelers have seen or experienced aircraft deicing, where the aircraft is sprayed with a misty fluid right before takeoff. This is how snow, ice or frost is removed from the aircraft’s surfaces. The airlines are responsible for deicing their own aircraft. Even though you’re still on the ground, the airlines operate their own trucks and deice their own planes.

One thing that makes the deicing process challenging is that the deicing fluids “expire” within a set period of time, usually around 30 minutes. That means once a plane has been deiced, it only has a short period of time to take off, otherwise it may have to get deiced again. This is especially tricky in the middle of a winter weather event when several aircraft are working to be deiced and depart during a small window of time between snow clearing on runways and taxiways.

Your flight is canceled – what’s next?

If your flight gets delayed or canceled, you’ll need to work directly with your airline. Only the airline can re-book you, help you with getting your luggage transferred, or offer alternative transportation solutions if they’re available. This may require some patience and diligence – the airlines are likely dealing with thousands of passengers in the same situation, not only at MLI, but throughout the impacted region. Keep your airline’s contact info handy so if you need it, you don’t have to go searching when you’re already stressed.

Winter weather can be tricky, but you can rest assured that both the airport and the airlines are working hard to keep things running as smoothly as possible. We don’t like delays or cancellations either, and the effects from a major storm can stretch for days as planes and crews try to make it back to their stations.

If you plan to travel over the winter, pack your patience, know what to expect and have a game plan if things go awry.